Due Process in removal of Permanent Secretaries from appointment 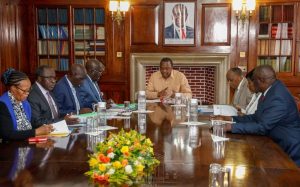 The office of Principal Secretaries is established by Article 155 of the Constitution. A Principal Secretary is appointed through undergoing interviews by the Public Service Commission who make recommendation to the President on persons to be nominated and thereafter the President forwards his nominees to the National Assembly for approval.

Is there a lacuna?
Whereas the Constitution is silent on removal of a Principal Secretary, section 51 of the Interpretation and General Provisions Act (cap 2) is to the effect that a person conferred with power to make an appointment also has the power to remove from appointment. The next question then is whether there is a process of removal of a Permanent Secretary. Again, the Constitution is silent on a specific process of removal of a Permanent Secretary. Equally silent is the Public Service Commission Act which provides for appointment of a PS.

The effect of Article 1 of the Constitution is that there are no masters and servants within the hierarchies of the ranks of state and public officers.

The foregoing was reiterated in the decision of Justice Byram Ongaya in Richard Bwogo Birir v Narok County Government & 2 others. The pleasure doctrine was subsequently discussed in the several other decisions of Court (see for instance the cases of Stephen Nendela v County Assembly of Bungoma & 4 others and County Government of Garissa & another v Idriss Aden Mukhtar & 2 others).

It is to be noted however that these decisions dealt with the issue of section 31 of the County Government Act and the power of a Governor to dismiss a member of the county executive.

There has previously been no determination on the exercise of the President’s power to dismiss a Permanent Secretary until the filing of the petition pitting Lilian Mbogo Omollo against Cabinet Secretary Ministry of Public Service & Gender, whose determination was rendered on the 21st October 2020.

According to the decision filed by the firm of Rachier & Amollo LLP and argued by our Senior Associate Kevin Wakwaya, the judge reiterated the doctrine that the pleasure principled in removal of public officers no longer applies in our current constitutional dispensation. The Judge however in his precedent setting decision extended the doctrine to hold that PSs do not hold their offices at the pleasure of the President and held that a PS is entitled to due process before removal.

The President has the power under Article 155 of the Constitution to nominate a PS upon recommendation of the PSC and appoint the PS upon approval by the National Assembly. Being the appointive authority, the President by dint therefore of section 51 of the Interpretation and General Provisions Act, equally has the authority to revoke an appointment. However, in revoking such appointment, due process has to be followed as provided under Article 236 of the Constitution.

Due process of law requires that a PS be given written reasons for their removal from appointment. The Court of Appeal in the case of Richard Bwogo Birir held that at the heart of due process are the rules of natural justice. The Court of Appeal went further to state that due process of law entails proceedings in which rules and principles for the protection and enforcement of private rights are upheld by the decision maker or relevant authority and that at the core of due process is according the concerned person a reasonable notice with sufficient particulars to prepare for a fair hearing.

In another decision (County Government of Garissa & another v Idriss Aden Mukhtar & 2 others) the Court of Appeal also held that although the employment of state officers is regulated by the Constitution and relevant statutes, the Employment Act applies to them and they are entitled to rights under the Employment Act, unless the Constitution, or the relevant statute, or their contract of service provide better terms.

In Julius Nyarotho v Attorney General & 3 others Court held that the Presidency should adhere to, promote and protect the Constitution, to mention a few say; observe national values and principles of governance, observe principles of executive authority, maintain integrity for leadership, observe legal requirement and if the Presidency violates the requirements of due process of the law as laid down in Constitution or any statute law, the Constitution is not helpless and does not suffer a wrong without a remedy. Where the President revokes an appointment without following due process, the courts can offer remedy.